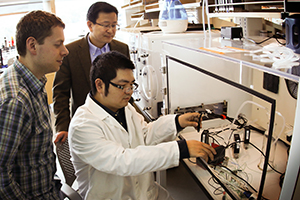 Utah’s growth in the technology sector continues to skyrocket, and engineering colleges around the state are doing everything they can to meet the high demand for engineers.

In the first six months of 2016, Utah had the greatest percentage increase of technology-related jobs in the U.S. with a growth of 7.7 percent, according to the U.S. Bureau of Labor Statistics, and the number of tech-sector jobs in Utah grew from about 46,000 to 70,000 from 2005 to 2015, according to the Economic Development Corporation of Utah (see graphic above).

“In some areas of the state it’s just massive growth,” Val Hale, executive director of the Utah Governor’s Office of Economic Development, said about the growing number of technology companies in Utah. “There’s no doubt that technology is playing a key role in our economy moving forward.”

As a result, 81 Utah companies led by the Utah Technology Council have endorsed Utah Rep. Val Peterson’s, R-Orem, $5-million Request for Appropriation to aid the state’s engineering and computer science programs in dealing with escalating student demand. These additional ongoing funds would add capacity to the statewide system and expand the workforce needed by high-tech companies. Since 2014, the number of engineering and computer science degrees awarded by the statewide system have increased by 29 percent thanks to prior state investments.

“Fortunately, the number of qualified Utah students who want to study engineering and computer science is growing as fast as the demand for graduates. In 2005, 7 percent of the U’s freshman class wanted to go into the College of Engineering — this year, it was 19 percent,” said Richard B. Brown, dean of the U’s College of Engineering. “We need to grow the capacity so that we can educate them for these exciting, creative jobs of the 21st century.”

Being able to tap into a bigger pool of qualified graduating engineers from the state would certainly help Starr Fowler. The senior vice president for human resources at Provo-based smart-home services company, Vivint, said they are desperately looking for new engineers to accommodate their massive growth.

“We are growing a lot,” she said. “We have double-digit revenue growth year over year.”

Currently, Vivint has some 35 job openings for software and hardware engineers — not to replace employees who are leaving, but to fill new slots for the company’s expansion. Fowler said they are looking for qualified people ranging from software developers to mechanical engineers who help design their home security and smart-home devices. She also said Vivint is not the only company along the Salt Lake Valley with an appetite for more engineers.

“It’s huge,” she said of the expanding technology sector from Ogden to Provo, known as “Silicon Slopes.” “All you have to do is drive down I-15 to the Point of the Mountain and the other side and just see. Every other week there’s a new building up or a new sign with a new company. The growth is substantial.”

And Utah is not starving for just software developers, GOED’s Hale said. An expanding manufacturing sector, including in areas such as composite materials, has created a need for mechanical, electrical and chemical engineers among others.

“Manufacturing continues to grow in our state, and it’s very engineering-dependent,” he said. “We’ve experienced significant growth, and manufacturing is involved in almost all of our clusters from life sciences to aerospace. They all rely heavily on manufacturing, which relies heavily on engineering.”

Hale added that Utah continues to be an attractive target for business startups thanks to the valley’s proximity to outdoor recreation, the state’s quality of life and low cost of living. Consequently, that has made these companies more competitive when it comes to filling their workforce, and median salaries for technology jobs have risen. The average salary for a software engineer in Utah, for example, is more than $95,000, according to Glassdoor.com.

“When a lot of the companies reach maturity and are purchased, they stay here, like Omniture. Those jobs stay here instead of migrating elsewhere, and that creates an ecosystem that thrives,” Hale said. “It’s a good place for businesses to come and take root and grow.”