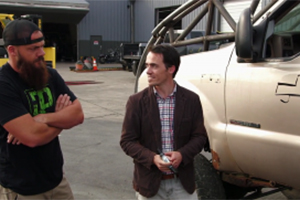 You may know Taylor Sparks as a University of Utah materials science and engineering assistant professor. But earlier this month, he was Taylor Sparks, reality TV guest star.

Sparks appeared in an episode of the Discovery Channel television show, “Diesel Brothers,” a popular reality program based on his brother’s successful truck modification shop, DieselSellerz, in Woods Cross.

In the latest episode, which aired March 13, his burly, bearded brother, Dave “Heavy D” Sparks, wants to modify a Ford truck so it can perform a somersault, a feat that has eluded him before. So Dave enlists his brother Taylor to come up with the necessary physics to make it happen.

Based on some equations, Taylor, who earned a doctorate in applied physics from Harvard University, deduces that his brother’s crew has to find the center of gravity, build a round roll cage, and use hydraulics and extra weight to force the truck to roll forward.

“We’re fighting physics,” Dave Sparks says in the episode. “Luckily, we’ve got a scientist on our side.”

Click on the video below to see if they make it (they try the stunt in front of Taylor’s engineering class).