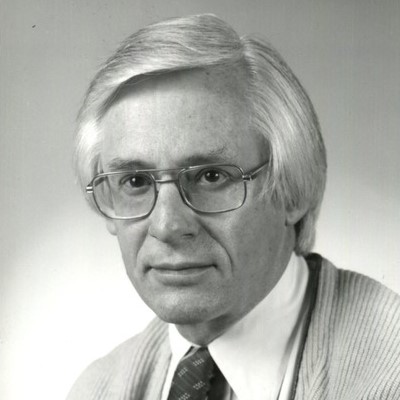 Donald J. Lyman, professor emeritus of Materials Science and Engineering and Bioengineering at the University of Utah, passed away last month at the age of 94.

Dr. Donald J. Lyman—scientist, researcher, educator, mentor and visionary—passed away at home on November 8, 2020, a few days after his 94th birthday. Throughout his long and distinguished career in industry, research institutes and academia, his love of science was palpable and infectious, a love that was first sparked by The Microbe Hunters by Paul De Kruif he read as an adolescent. It introduced him to a world of inexhaustible discoveries, one that he would explore through chemistry.

Equipped with the Gilbert chemistry set his parents bought him as a boy, he built his first chemistry lab in the basement of his parents’ home. The beauty of the natural world awed him and never ceased to inspire his curiosity and passion for learning.

Gifted with imagination, a nimble mind open to new ideas, and the ability to reduce complex ideas to understandable nuggets, Dr. Lyman had a knack for reaching across to people of all ages and backgrounds, drawing them into his world of science. An international leader in the field of biomedical polymers, he advocated for an interdisciplinary and cooperative approach among researchers to successfully tackle the challenges posed by the complexities of repairing the human body. He cautioned that the sharp distinctions drawn between various specialties, while being useful human contraptions for organizing the world around them, disappeared in nature and carried the danger of contributing to myopia that hindered cooperation and innovation.

Dr. Lyman began his research career at the Pioneering Research Laboratory of E.I. DuPont de Nemours after receiving his Ph.D in organic chemistry from the University of Delaware in 1952. At DuPont, he focused on polymer synthesis and structure/property relationships under the direction of Dr. William Hale Charch. With the premature death of Dr. Charch in 1958, Dr. Lyman began looking beyond DuPont to expand into other areas of polymer research. Professor Herman Mark at the Polytechnic Institute of Brooklyn suggested that he contact Dr. Maurice Huggins who was looking for a synthetic polymer chemist. Dr. Huggins invited Dr. Lyman to join his team at the Stanford Research Institute. The move to SRI in 1961 was a pivotal turning point for Dr. Lyman.

Soon after arriving at SRI, Dr. Lyman attended a lecture at Stanford’s medical school by Dr. Belding Scribner describing the first 15 patients kept alive on chronic dialysis using an arteriovenous shunt he developed at the University of Washington. Until  then, fresh cuts in a patient’s arm were made to access the artery and vein each time the patient was dialyzed, which severely limited the number of procedures since the same access sites could not be reused in most cases. After the talk, Dr. Lyman approached Dr. Scribner with some ideas on developing membranes to remove toxins during dialysis. This led to Dr. Scribner funding Dr. Lyman’s first year of membrane research. Funding from the John Hartford Foundation and the National Institute of Arthritis and Metabolic Diseases soon followed.

Dr. Lyman also began working on the effects of polymer structure and surface properties on the coagulation of blood. This research to synthesize thromboresistent polymers was supported by the National Heart Institute. One of the polymers developed, a new copolyether urethane urea, was later used in fabricating the first generation of the Utah artificial heart designed by Dr. Clifford Kwan-Gett.

Because of his work at SRI, Dr. Lyman was elected in 1964 as a member of the American Society for Artificial Internal Organs. At the time, Dr. Lyman was among only a half dozen or so Ph.D.’s among a sea of M.D.’s. There he crossed paths with Dr. Willem Kolff who at the time was the Scientific Director of Artificial Organs at the Cleveland Clinic. In 1967 Dr. Kolff left for the University of Utah to direct the Division of Artificial Organs that was started by Dr. Keith Reemstma, Head of University of Utah’s Department of Surgery and Acting Dean of the College of Medicine.

On the recommendation of Dr. Kolff, Dr. Reemstma invited Dr. Lyman in early 1969 to join the University of Utah, offering him research and teaching appointments in both the College of Medicine and the College of Engineering. Attracted not only by the opportunity to work with Dr. Kolff  but equally by the atmosphere of excellence and cutting edge research that permeated the University under the leadership of President James Fletcher (who later headed NASA) and others such as Dr. Reemtsma and the renowned hematologist Dr. Maxwell Wintrobe, Dr. Lyman embarked on a 20-year stint at the University of Utah.

Dr. Lyman’s continued interest in the synthesis and characterization of polymers and the broader applications of polymers as implants led him to pursue his own research programs. From early in his research on biomaterials, one of Dr. Lyman’s long range goals was to develop polymer implants that would repair the injury in the acute phase but then function as scaffolding to promote healing to ultimately reduce or replace the body’s reliance on the implants. He obtained numerous grants from several agencies including the National Science Foundation, the National Heart Institute, and the National Institute of General Medical Science. The largest of these programs was the Biomedical Engineering Center for Polymer Implants funded by NIGMS in 1978 and directed by Dr. Lyman. An interdisciplinary team of leading researchers in different specialties was brought together to work on a variety of implant areas, including vascular graft, ureter, esophageal and nerve repair. The Center was the first of its kind in the United States.

In addition to his research, Dr. Lyman taught both undergraduate and graduate courses in biomaterials and chemistry throughout his tenure. His courses were popular among students but none more so than his polymer synthesis class, a hands-on graduate level lab course taught every summer quarter through the Chemistry department. Space was limited and there was always a waiting list of students wanting to enroll.

Dr. Lyman’s research attracted graduate students, post docs, fellows and visiting professors both domestically and internationally. As faculty advisor to over two dozen masters and doctoral students, Dr. Lyman was both demanding and approachable. He also trained surgical residents on research methods through the Surgery department. He enjoyed teaching, hoping to challenge students to think independently and question conventional wisdom. Generous with his time and sparing no effort to help his students achieve their goals, his students will remember getting back numerous red-lined drafts of their thesis and dissertation and the countless hours spent rehearsing their oral presentation in front of Dr. Lyman and their colleagues, all in an effort to prepare for the main event. It was particularly helpful to those for whom English was not their first language.

Dr. Lyman’s research continued after leaving the University and moving to Washington state. From 1994 to 2003, he was the director of Polymer Chemistry at the Hope Heart Institute, a research institute in Seattle, Washington founded by the late Dr. Lester Sauvage, a world renowned heart surgeon. Dr. Lyman’s last research took him into an entirely new area of study—that of using Fourier transform infrared spectroscopy to study the molecular changes that breast cancer appeared to initiate in the morphology of hair. His foray into this research was accidental. He learned from his long time friend, the late Dr. Maxwell Feughelman (University of New South Wales, Australia), that a former graduate student of his (Dr. Veronica James) detected shifts in the pattern of hair structure in the presence of breast cancer using Synchrotron x‑ray diffraction. Though these pattern shifts were observable, x‑ray diffraction could not explain the molecular changes causing the shifts. Having used Fourier transform infrared spectroscopy extensively in his polymer research to study molecular structures, Dr. Lyman thought it might be able to shed light on what was happening at the molecular level to cause these pattern shifts. His last two papers reported his findings.

Dr. Lyman’s achievements are many. He authored and co-authored nearly 170 scientific papers and book chapters. He is the holder of several patents and the recipient of many awards and honors, including University of Utah’s Distinguished Research Award for 1982-1983, the Clemson Award for Basic Research (Society for Biomaterials) for 1982, visiting professorships and invited lectureships. He served on editorial boards, think tanks and steering committees. He was also a founding member of the Society for Biomaterials.

These achievements would not have been possible were it not for the many colleagues, students, staff and friends, too many to name, but the list would not be complete without mentioning Dr. Dominic Albo, professor of surgery with whom Dr. Lyman began working immediately upon arriving in Utah and whose friendship helped sustain Dr. Lyman during trying times.