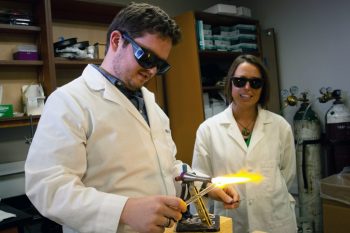 Congratulations to metallurgical engineering senior, Jerry Howard (MET-E, ’21), who was recently offered a National Science Foundation Graduate Research Fellowship to support his planned doctoral studies at the University of Nevada at Reno. If accepted, the award will support Jerry’s stipend and tuition for three years. The total value of these awards is about $138,000. It is a highly competitive award with only about 15% of the applicants selected for awards.

Only 11 NSFGRF’s were awarded to current University of Utah students this year. Jerry is ranked at the top of his graduating metallurgical engineering class and has had a highly distinguished research record under the advising of Prof. Krista Carlson. He is currently supporting a project funded by Idaho National Laboratory and led by Prof. Carlson and Prof. Michael Simpson to develop a process for treating radioactive salts for interim storage