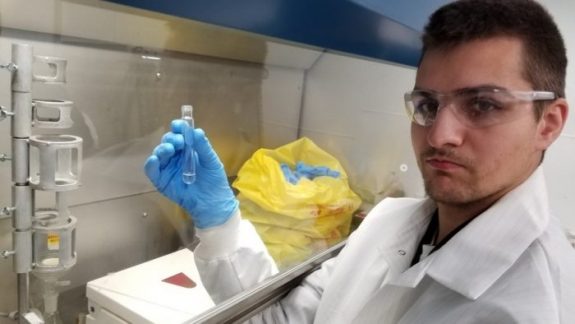 During his Ph.D. studies in the Department of Metallurgical Engineering at the University of Utah, Dr. Milan Stika studied molten salt electrochemistry under Prof. Michael Simpson. They worked on methods for measuring concentrations of actinides in molten salts used for applications such as nuclear reactors and nuclear fuel reprocessing. After a brief stint working for Flibe Energy on development of molten salt fueled nuclear reactors, Milan now works at Niowave, Inc., a company that produces radioisotopes used for medical diagnostics and cancer treatment. The company has a great team of accelerator physicists, nuclear engineers, and radiochemists supporting its mission. As a radiochemist, Milan works on projects that deal with separation of individual radioactive elements.

Niowave irradiates uranium targets to induce fission which creates a variety of useful fission products. The target is then dissolved so that fission products like molybdenum-99 can be harvested. Uranium is first pulled away from the rest of the elements using solvent extraction. It is then recycled into a new target. The elements useful for medical applications are then separated from each other using ion exchange resins and other methods.

Niowave also irradiates radium targets to produce actinium-225, a useful medical isotope along with other alpha emitters for targeted alpha therapy. Actinium is separated from radium and other products of the radium decay chain. Niowave is currently the only US private company producing actinium-225.

According to Milan, “the Department of Metallurgical Engineering was instrumental in helping me prepare for this exciting job in the nuclear sector by offering relevant coursework, networking opportunities, and advisor guidance.”