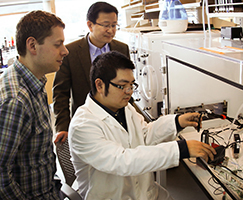 “You want tech jobs in Utah, you’ve got to have more engineers.”

That’s what Adobe co-founder and University of Utah College of Engineering graduate John Warnock once said to then-Utah Governor Michael Leavitt, according to a May 11 story on Forbes about Utah’s rising tech sector.

In the last 20 years, the number of tech jobs in Utah rose 347%, and the state is now third in the country in venture capital activity per capita, according to the story.

Read below from Forbes about Utah’s success story as a rising tech center, thanks in no small part to our ability to feed new engineers into the workforce.

A few weeks ago, Former Utah Governor and Health & Human Services Secretary Michael O. Leavitt spoke at a technology summit here in the state. He talked about where Utah’s tech sector was 25 years ago, where it is now and what needs to happen to keep the momentum going.

“Leadership is a generational relay,” Leavitt said. “Each generation builds on the generations before.” A quarter of a century ago, Leavitt’s administration laid the foundation for the state’s business growth with an objective to become a tech capital.

Click here to read the rest of the story.