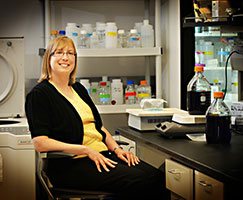 University of Utah materials science and engineering professor Shelley Minteer was elected Fellow of the American Association for the Advancement of Science (AAAS), it was announced Nov. 28. Election as a Fellow is an honor bestowed upon AAAS members by their peers.

She is one of two U professors to receive the honor this year. The association also named chemistry professor Glenn Prestwich. Both are among 416 newly-elected Fellows.

Minteer was elected for “fundamental and applied contributions to electrochemistry, including electrocatalytic cascades and natural and artificial metabolons for biofuel cells.”

Minteer’s career has focused on using nature as an inspiration and solution to chemistry problems. Her work has resulted in 17 issued patents and over 300 peer-reviewed publications in using biology as inspiration for biosensing, energy storage, energy conversion, and electrosynthesis.